Getting Started with Intel® Galileo Gen 2

Intel® recently announced their Galileo Gen 2 board - successor to the original Galileo. 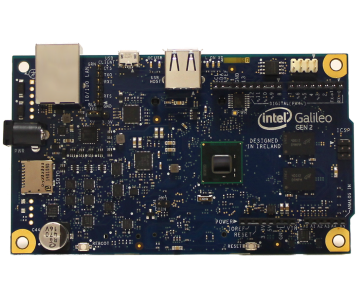 Information, software, schematics and other resources are available from Intel:
Release 1.0.2 of Galileo Software
Intel Galileo Gen 2 Development Board Documents

Galileo Gen 2 retains the Arduino Uno shield interface and same basic feature set, but includes a significant number of additions and improvements over the original Galileo board.

This article shall discuss some of these changes and provide additional information for existing software users looking to migrate from the original Galileo board.  Some familiarity with the Galileo board is assumed.

Some of the notable changes are:

Many other minor improvements have been included in the Galileo Gen 2 design. For a complete list, please refer to the relevant documentation from Intel.

3. Arduino users – what you need to know

The Arduino IDE has already been updated to include support for Galileo Gen 2, since Release 1.0.2 of Galileo Software. Hardware differences are mostly hidden under the Arduino API implementations so, for most users, it should be a matter of simply recompiling existing sketches for the new board. To compile your sketches for Galileo Gen 2, simply download and install the latest IDE version and make sure to select the Intel® Galileo Gen 2 entry in the Tools->Board menu on the IDE before compiling and uploading your sketch: 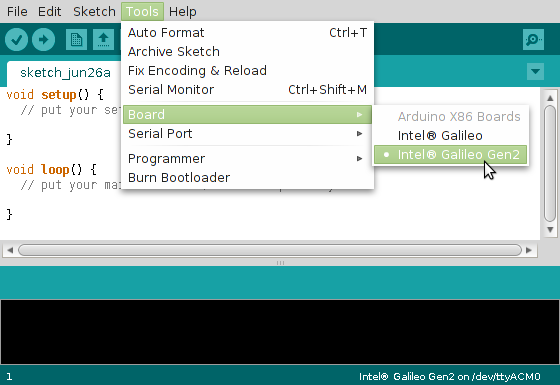 To utilise this UART in an Arduino sketch, simply use the Serial2 object. For example:

In addition, the SoftwareSerial library has been ported for use on Galileo Gen 2. If configured to use shield pins 2-3, it will avail of UART #1 via the Serial2 object above. At this time, Galileo Gen 2 does not support “bit-banged” software implementations of the UART serial protocol on GPIO shield pins, and is thus restricted to work with this hardware-based UART only in its SoftwareSerial implementation.

GPIO functionality on these shield pins is provided directly by the Quark X1000. Accessing these pins through the standard Arduino API functions digitalWrite() and digitalRead() allows a sketch to toggle these pins at a frequency of approximately 390 kHz. This performance capability was available on the original Galileo, but only on digital shield pins IO2 and IO3, and only when OUTPUT_FAST pin mode was selected for those pins.

For even better performance, the following Galileo-specific API functions may also be used:

Some sample sketches code demonstrating the use of these:

The latter function, fastGpioDigitalRegWriteUnsafe, is significantly faster because it involves only a single write to the underlying hardware register for the GPIO port. The application code is responsible for maintaining the state of that register (obtained initially using fastGpioDigitalRegSnapshot) and toggling only the bit for the respective digital pin.

fastGpioDigitalWrite is a slightly “safer”, but slower, alternative as it performs a read of the GPIO port register prior to modifying the bit for the selected digital pin. Nonetheless, it assumes that there are no other threads or processes running in the system is also accessing the same GPIO port registers concurrently. Caution must be exercised in particular when used in conjunction with interrupt handlers in the Arduino sketches (e.g. see attachInterrupt and attachTimerInterrupt) as these handlers run from within a separate thread in the Arduino sketch application.

Note that the performance figures above are not guaranteed. The Arduino sketch is not the only software process running in the system, and the underlying Linux OS is not designed for real-time applications in its current configuration. Therefore, some variation in the stability and consistency of the GPIO output signals should be expected.

The standard Arduino API for PWM output, analogWrite() assumes by default an 8-bit resolution capability for the PWM outputs and so expects a value in the range 0-255. However, the Galileo Gen 2 PWM driver supports 12-bit resolution, which allows for a more fine-grained set of 4096 steps for the duty_cycle. To avail of this, there is a function called analogWriteResolution() that may be used to set the desired resolution to 12.

analogWriteResolution() is not enabled in the Release 1.0.2 by default, but can be enabled by adding to the file named
‘hardware/arduino/x86/cores/arduino/AnalogIO.h’ in the Arduino IDE folder:

The following sample sketch, adapted from the “Fading” example sketch included with the Arduino IDE, illustrates the use of this function on Galileo Gen 2:

4. Linux users – what you need to know

Galileo Gen 2 includes 3 PCAL9535A GPIO expanders, connected to the Quark X1000 via I2C at addresses 0x25, 0x26 and 0x27. They are supported by the pca953x kernel GPIO driver, extended for Galileo Gen 2 to add support for PCAL9535A interrupt handling.

Some additional points to note on the GPIO lines provided by the PCAL9535As on Galileo Gen 2:

File I/O access to the GPIO ports from user space is provided via entries in the following sysfs directory:

Some additional points to note on this PWM driver on Galileo Gen 2:

File I/O access to the PWM channels from user space is provided via entries in the following sysfs directory:

Further information on the use of PWM user-space interfaces can be found in relevant kernel documentation and other sources.

Galileo Gen 2 includes a 6-channel 10-bit ADC, connected to the Quark X1000 via SPI bus 0, chip-select 0. It is supported by the ads1x8s102 kernel IIO-ADC driver, newly developed for Galileo Gen 2.

File I/O access to the ADC channels from user space is provided via entries in the following sysfs directory:

Further information on the use of IIO user-space interfaces can be found in relevant kernel documentation and other sources.

Some additional points to note on this ADC on Galileo Gen 2:

Galileo Gen 2 includes a 1kByte EEPROM, connected to the Quark X1000 via I2C at address 0x54. It is supported by the standard at24 kernel eeprom driver.

File I/O access to the EEPROM from user space is provided via the following sysfs entry:

Similar to the original Galileo board, some board-level configuration is needed before a given shield pin can be used for a specific purpose. For most of the pins, it is necessary to configure some or all of the following:

All of the above are configurable using dedicated GPIO signals from the GPIO expanders, which in turn can be controlled according to the needs of the application software. The Arduino library provided for Galileo Gen 2 implements the pin configurations for the various Arduino application use cases. Control of the GPIO signals is achieved via the sysfs interface under /sys/class/gpio.

Sergey Kiselev wrote an excellent guide for GPIO pin configuration for the original Galileo board. Here, we aim to provide a similar guide for Galileo Gen 2:

Note: with the exception of the “Interrupt Modes” column, the following single-letter convention is used in the table above to indicate the state of a GPIO pin:

“L” The GPIO is configured as an output, with output level as LOW

“H” The GPIO is configured as an output, with output level as HIGH

“I” The GPIO is configured as a high-impedance input

Typically, the SPI controller driver in Linux is responsible for implicitly controlling the chip-select line for a given device. For Galileo Gen 2, GPIO #10 is intended to be used as the chip-select signal when connecting to an external SPI device via the shield I/O pins. As such, the handling of the chip-select signalling is done underneath the SPI API, transparently to client code.

However, the Arduino library employs a different paradigm for this. Rather than assuming a dedicated chip-select line managed by the SPI controller, Arduino assumes that any GPIO output can be used for chip-select signalling and leaves the choice to the sketch application.

To override this and use SPI at the Linux level (e.g. via /dev/spidev1.0) with implicit chip-select control, the user must first allow the SPI controller driver to use GPIO #10. To do this, edit the grub.conf file (i.e. /media/mmcblk0p1/boot/grub/grub.conf), append the following parameter to the kernel command line (the line beginning with ‘ kernel’ for the relevant grub entry), and reboot:
intel_qrk_plat_galileo_Gen 2.gpio_cs=1

To verify this, the following command should return an error since the GPIO is now reserved by the SPI driver:
echo 10 > /sys/class/gpio/export

Emutex is a software engineering company based in Ireland. We are passionate about developing innovative software solutions for embedded systems. To learn more about us, please visit our company website: http://www.emutex.com