MySensors is a demonstration of Emutex’s ubiworx™ product in a potential industrial application. Installed on an ARM Cortex A8 platform, ubiworx™ connects a variety of sensors and actuators to a smart gateway allowing them to be monitored, managed and controlled, from web apps and mobile devices.

Using the ubiworx™ industrial IoT framework for data acquisition from a variety of different sensor inputs via GPIO, I2C, IIO, Ethernet, USB and MODBUS, we can aggregate and analyse data locally and trigger events at the device level. For example the fan can be set to come on when the temperature goes above a certain level, or the alarm can be triggered when the PIR motion detector and one of the door sensors are triggered in the same period. The RFID reader can be used to keep track of who is in a facility at any time. The noise detector monitors noise levels while the DIGI Xbee device measures both temperature and light levels. Using ubiworx™ we can trigger events locally to turn on and off devices, send SMS messages and raise alarms depending on user definable threshold levels.

Ubiworx™ also has the capability to send data to a variety of cloud services from which both live and historical data can be viewed, thresholds can be set and new devices can be added. 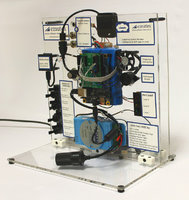 For the MySensors demo, information is sent via 3G to Emutex’s own device cloud and via Wi-Fi to a tablet providing a user interface to manage and monitor a range of sensors.

Written in C for speed and portability ubiworx™ allows high-level control functions to be scripted quickly and easily in Lua. It runs on Linux, on a wide variety of hardware architectures with a small memory and CPU footprint.

MySensors is designed to showcase ubiworx’s ability to acquire data from a variety of different sensor types, aggregate and analyse it locally and trigger events at the device level. The mobile app demonstrates its' capability to monitor and control devices based on user defined thresholds and conditions as well as remote monitoring of both live and historical data.

Ubiworx,
Your Gateway to Connecting
Devices and Data
to Systems and People