The winning project of the Emutex Software Innovator Of The Year Scholarship 2014.

Gerard Prunty, a 4th year Computer Science student at University College Cork (UCC), launched a weather sensor system into the Earth's stratosphere with the help of a weather balloon. This system was comprised of an Intel Galileo hardware platform and software developed by Gerard under the guidance of Emutex engineers.

When Gerard dreamt of developing a system with his own two hands and sending it 30 km above the Earth's surface, he never thought the day would arrive where he would see it come to life. Gerard, a Computer Science student and a maker, grew this ambitious idea into an exciting project that had the potential to provide meaningful data as well as stunning video footage.

Gerard had decided that the focus of the project would be to develop a weather sensor system. He would then send it to the Earth's stratosphere to gather information on the harsh environmental conditions at that height. Temperatures can reach as low as -60 degrees Celsius on a trip through the troposphere and tropopause before "warming" to -30 degrees Celsius at the stratosphere. The magnitude of this task did not deter Gerard as he aimed to see his project in action.

The weather sensor system was comprised of an Intel Galileo development board with a number of sensors attached. An Adafruit Ultimate GPS module mounted on the Galileo recorded latitude and longitude while a BMP085 pressure sensor recorded temperature, air pressure, atmospheric pressure and altitude. The Galileo would read and parse the sensor information before composing a text message containing the relevant data. This message was then transmitted using an on-board Sim900 GSM shield to Gerard's mobile phone. The text messages were received every minute during the phases of the flight that the device had 2G/3G cellular coverage. If everything went to plan this messaging method would provide the landing location of the system. All of the data collected was stored on the Galileo's SD card so that it could be analysed later.

The Galileo and the sensors were housed in an insulated cooler bag to protect the electronics from the harsh environmental conditions, particularly the freezing temperatures and any excess moisture. To improve the chances of finding the system, a mobile phone was added to the bag's payload so that it could be texted for its GPS location when it landed. The cooler bag was placed into a sealed box along with two sports cameras that would record the journey to the stratosphere.

Emutex provided much of the hardware used in the project as well as providing technical support for Gerard with any issues that he encountered. Dave Hunt, a senior engineer at Emutex, was assigned as Gerard's mentor for the duration of the project. He helped him in particular with the challenge of powering the system for the duration of the flight. Dave suggested using a power bank commonly used for charging external USB devices such as mobile phones.

The Met Éireann Valentia Observatory located in Cahersiveen in the west of Kerry did not disappoint with the conditions on the day. There was a light breeze from west to east with barely a cloud in the sky which provided the perfect environment for launching the weather sensor system. We were told by Shane Ryan of Met Éireann that the balloon would rise at about 5 meters per second with the Helium in the weather balloon continuing to expand as it rose. Eventually, after reaching a height of 30 km, the balloon would explode and the weather sensor system would parachute back down to earth.

Once the balloon was filled and the weather sensor system attached, we were ready for launch.

At approximately 2 o'clock the conditions were deemed perfect and the balloon was launched. The system continued to text its location for just under 10 minutes until it lost 2G/3G cellular coverage. From this time we would not hear from the system again for a number of hours. It was also possible that the harsh conditions on the system's journey could damage the electronics meaning that all communication would be lost.

It was difficult to predict exactly where it would land as our system differed in weight from a typical weather balloon payload but we headed towards a little town named Boherbue in Co. Cork 100 km from the launch site. We waited patiently for the text message to arrive but three hours later there was nothing from either the Galileo or the backup mobile phone.

Hopes were starting to fade when, to our great delight, a text message arrived from the Galileo followed by another text message from the mobile phone. Unbelievably, both messages were missing the GPS coordinates but thankfully, once the devices could triangulate, they eventually provided us with the location of the system. It had landed another 100 km east of our location just outside Cashel in Co. Tipperary.

The hunt was on as we got closer to the location provided by the system. We ended up driving down a small farm road until we couldn't go any farther. We could see from the GPS location that the system was through to the next field and so we continued walking in anticipation until Gerard spotted the bright red parachute in the distance just at the edge of the field. When we arrived we could see that the system itself was stuck in a tree but after a bit of pulling on the parachute the weather sensor system finally hit land.

When we opened the insulated cooler bag the Galileo and mobile were still alive with the Galileo continuing to send text messages every minute. With great excitement, we connected a laptop to the cameras to get a look at some of the video footage that was captured on the long journey. Some of this can be seen in the video at the end of this article.

Gerard and his winning project 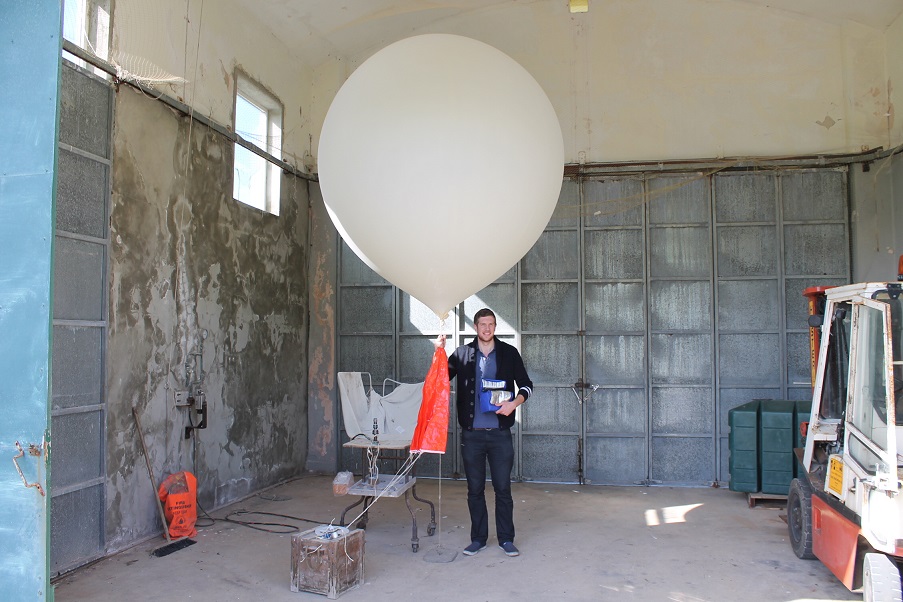 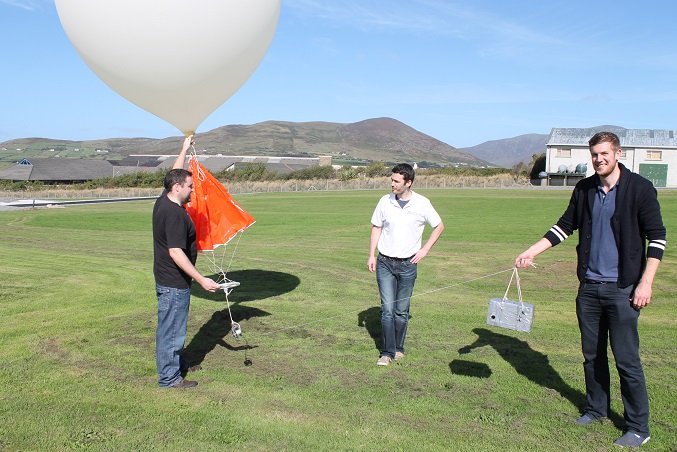 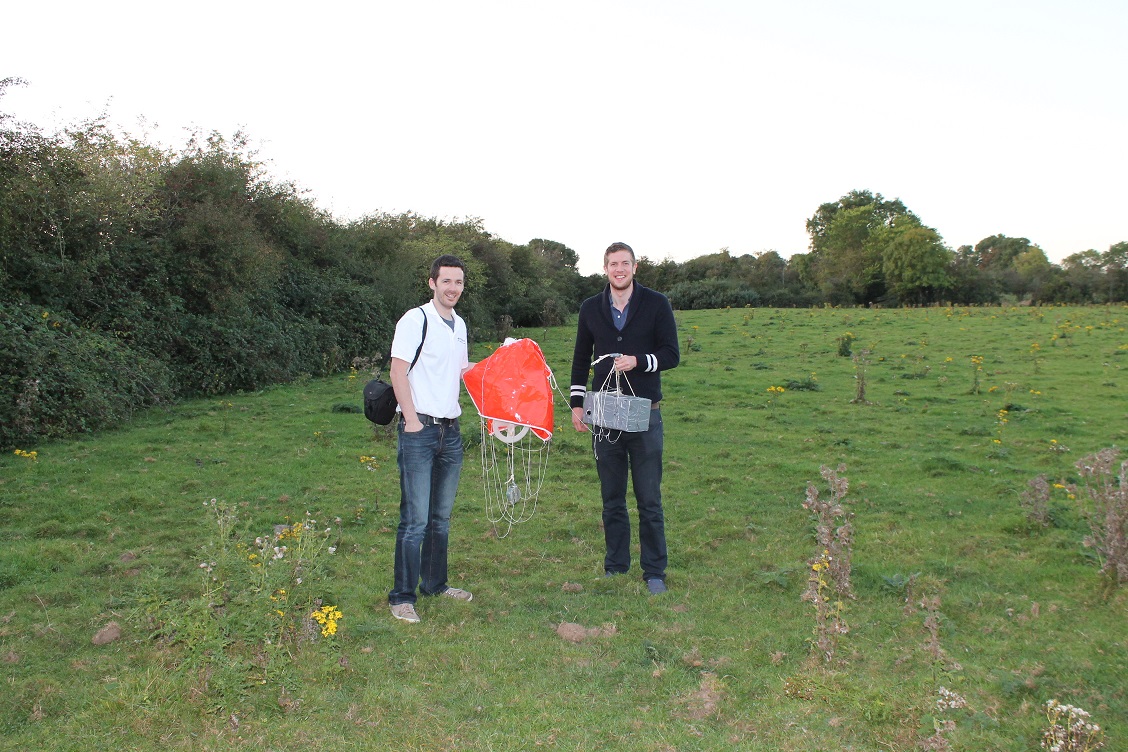 Beyond a few nervous moments that the system might not be found, the day could not have gone any better. The weather sensor system had decided that it would stay a bit longer than planned in the stratosphere to enjoy the view but eventually returned back to land to tell its story.

The environmental data will now be analysed in more detail by Gerard in order to understand all of the conditions encountered on the trip to the Earth's stratosphere.

This really could not have come together as it did without the help provided by everyone involved. The people at the Met Éireann observatory in Valentia, and in particular Shane Ryan, were extremely helpful by providing a launch pad for the project which simply could not have happened without them. Thanks to Intel for donating the Galileo boards used for this project. Also, thank you and well done to the other students that were involved in the scholarship program.

The project itself provided huge interest within Emutex with everyone wanting to get involved as is the nature of the company so thanks to everyone who did. Finally, congratulations to Gerard Prunty who designed, built and launched the weather sensor system to the Earth's Stratosphere. To take on a project like this and follow it through to the very end is an exceptional achievement and one that I am sure he will never forget.

So, take a look at the video below to see the full highlights of the day including fantastic footage from the journey.